The Western Michigan University SAA Chapter hosted its 3rd Annual Charity Golf Tournament on August 17, 2019. The profits raised by the golf outing are used to create a scholarship fund for the patients seen on-campus at the Charles Van Riper Hearing Clinic at Western Michigan University. All first, second, and third year students were able to participate during the preparation for the event or on the day of the event. SAA at WMU sent over 200 letters asking for donations, and went door to door to over 120 businesses in the Kalamazoo area. 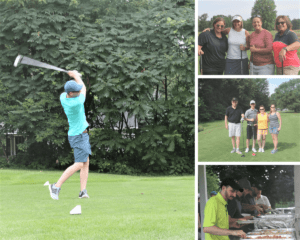 On the day of the event, participants enjoyed coffee and doughnuts before 18 holes of golf. Throughout the day there was also a Silent Auction with baskets, tickets, and gift cards all donated to the event. On the course, there were contests such as the longest drive, closest to the hole, and farthest wiffle ball. Once the participants were done golfing for the day, they enjoyed lunch and the winners of the Silent Auction and contests were announced. We are proud to say that the Western Michigan University SAA Chapter’s 3rd Annual Charity Golf Tournament was a major success with 85 golfers, raising over $5,500 for the patient scholarship fund. We’d like to thank all our friends, family, community members, and staff for supporting our efforts!
Share this

The University at Buffalo SAA Chapter participates in Buffalo’s Walk4Hearing event every year. They participate by walking, volunteering to set up and clean up, helping with children’s activities, displaying event signs, assisting in event parking, fundraising, and coming together as a group to support our community. Not only is this a fun and active way…

University of Pittsburgh Adapts Chapter Activities for the Virtual Environment

The University of Pittsburgh SAA Chapter has been creatively adapting their past humanitarian activities for virtual environments. This includes supporting their local Ronald McDonald House through hosting fundraisers, preparing welcome bags for the families, and continuing to educate the community about ears and hearing with videos at a local community engagement center. The University of…

The Florida State University (FSU) SAA Chapter has been working diligently to keep their SAA chapter active, virtually! In October 2020, the chapter hosted a variety of events over the course of a week to raise awareness for audiology. Some of these events included hosting a Q&A about  “A Day In the Life”, fundraising for a non-profit…