Case History
CL, a 15-year-old patient born with cerebral palsy, came into an audiology clinic for a hearing aid evaluation accompanied by his mother. CL is an experienced hearing aid user, as he was born with congenital hearing loss thought to be caused by a brain bleed. CL self-reports removing his hearing aids when he does not wish to listen to his physical therapist, mother, or anyone he “finds annoying” (if only we all could do that!). His last hearing test was performed in 2014. The right ear revealed hearing within normal limits until 1 kHz, sloping to a moderate sensorineural hearing loss while the right ear revealed a mild to severe rising to moderate sensorineural hearing loss in the left ear. Word recognition scores (WRS) showed an asymmetry between ears at 96% and 72% for the right and left ears, respectively.

Audiometric Results
Today’s results (shown below) reveal a bilateral mild to severe sensorineural hearing loss, primarily on the left side. SRT agrees with the PTA, and the WRS scores are consistent with his configuration of hearing loss.

Please note that this clinic’s WRS protocol entails the presentation level to be 10 dB HL below UCL. As a result, WRS presentation levels were 70 dB HL on average bilaterally. This caused difficulty in obtaining CL’s WRS as the majority of his thresholds were greater than 70 dB HL bilaterally, especially at the higher frequencies. There was a slight possibility with roll over in the left ear, but because of the patient’s medical history and clearance, and that the scores in question were first obtained unilaterally then bilaterally, the audiologist did not feel the need to refer out. Speech-in-noise testing was not performed due to patient fatigue, as CL came to the appointment immediately after completing a one-hour physical therapy session. 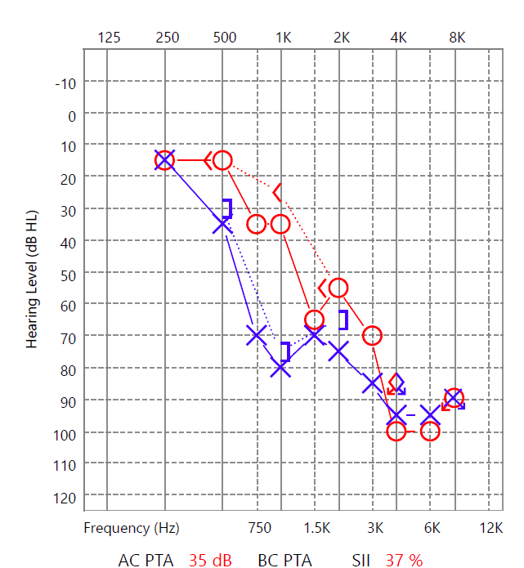 Interpretation of Results
The results indicate that CL’s hearing has significantly shifted from his last hearing test five years ago; however, the audiologist refrained from referring him for medical imaging, as the clinic had medical clearance from the family and CL’s previous case history was well-documented.

While testing each ear individually on WRS, we had to test different intensities and got differing scores that were both incredible scores. This was worrisome for assessing the benefits of amplification, until we tested bilaterally between the two presentation levels. The bilateral WRS (100% at 80 dB HL) indicates that binaural amplification would greatly benefit this patient, as opposed to unilateral amplification.

Counseling
The results of this hearing test were discussed with CL and his mother and they were counseled on continued use of his hearing aids. They were recommended new hearing aids and assistive listening devices as CL’s current hearing aids are now five-years-old.

During counseling, CL’s mother reported that CL was previously prescribed Gabapentin to mediate the pain he was experiencing due to his condition. Gabapentin is a severely ototoxic drug that has been shown to cause sudden hearing loss, hyperacusis, tinnitus, and vertigo (Bauman 2009). His mother also reported that CL complained about the sound of his own voice, a common sign of sudden hearing loss in children, while taking the medication. The medication was terminated once it began to affect CL’s mood. Because the mother indicated that CL was prescribed this drug “a while ago”, the audiologist did not look further into it.

Take-Home Message
Some lessons to learn from this hearing evaluation appointment:

Audiologists are an essential part of a patient’s holistic care. For children with multiple pathologies like CL, we can play a vital role in advocating for the hearing care he needs. Audiologists and audiology students advocate on Capitol Hill and educate fellow healthcare professionals so the risk of acquired hearing loss diminishes for these children. We should make our role known to the medical community, so we can help our patients on every level of care

Bauman, N. (2009). Gabapentin Does Not Work for Tinnitus. Retrieved December 13, 2019, from https://hearinglosshelp.com/blog/gabapentin-does-not-work-for-tinnitus/.

Conner Jansen is a first-year AuD student at the University of Texas–Dallas. Conner is a member of the SAA Communications Committee.

Meet the Candidates for the 2022-2023 SAA Board of Directors