My name is Jason Baker and I graduated with my Doctor of Audiology (AuD) degree from the University of Texas at Dallas in May of 2018. I am currently working at the Callier Center for Communication Disorders in Dallas, Texas, specializing in vestibular assessment and treatment, and hearing aid dispensing. Over the last four years, I have become increasingly involved with the Student Academy of Audiology (SAA) and have developed a strong passion for advocacy. In order to continue advocating for the profession, I am also planning to serve on Texas Academy of Audiology (TAA) and American Academy of Audiology (AAA) Committees and continue to support SAA’s endeavours.

When I first heard about SAA at orientation, I was under the impression that it was just a ‘club’ that all students joined. At the time, I had no idea how many opportunities my local chapter and the national SAA would offer throughout four years of school. During the first few months of grad school, I thought going to class and attending clinic would be plenty to fuel my interests in audiology. However, as the weeks went by, I knew I wanted to become more involved with SAA.

The ‘Aha’ Moment
I was fortunate to have Dr. Jackie Clark as my clinical preceptor during my first semester of grad school. I didn’t quite understand SAA, AAA, and advocacy, but throughout many hour-long car rides to clinic, Dr. Clark made it clear that in order for our profession to thrive, we must lead from within. No one else is going to fight for the profession and advocate for audiology and our patients as much as audiologists. We are responsible for how audiology is viewed and we must lead the profession in the right direction. From this point forward, I kept asking myself: Do I have what it takes to be a student leader? How do I get involved?

How I Got Involved
Initially, I was under the impression that in order to be involved and be a ‘leader,’ I had to aim high and hold a ‘leadership’ title (i.e., President, Committee Chair, etc.). At UT Dallas, I managed to be our local SAA Chapter president, but beyond that, I did not feel confident in my abilities to hold a position like this at the national level. However, I quickly learned that my role as a leader is not necessarily the one delegating and ‘running the show.’ I believe leadership comes in all shapes and sizes, and it isn’t the ‘title’ or a certain position that makes someone a leader. Leaders are those who are willing to volunteer, advocate and encourage others to do the same.

Ever since my second year of graduate school, I have been actively involved in SAA. Between then and now, I have served on the following national SAA committees: Programs Subcommittee (2015 – 2016), Nominations Committee (2016 – 2017), and the Public Outreach Committee (2017 – 2018). These experiences have created the groundwork for my future endeavors as a professional leader in audiology and I am fortunate for each of the opportunities I have had to serve on these committees.

Beyond national SAA committees, I have also been a part of various initiatives and programs to encourage and foster student leadership. Through the TAA and Louisiana Academy of Audiology (LAA), I was an inaugural member (2016) of the Future Leaders of Audiology Student Conference (FLASC). In addition to local and state efforts, I have been part of the following National SAA initiatives: Student Leaders in Audiology Conference (SLAC) and the SAA Mentorship Program (2017 – 2018).

There are a number of student leadership opportunities for anyone willing to step up and get involved. I sought out my own experiences and continued to reach out in order to get plugged in and stay plugged in. Many experiences are not going to be handed over to you. I encourage the students already involved to stay involved and, to the students asking the same questions I asked myself, you are qualified and all you need to do is reach out and volunteer.

Opportunities Available for Students
Below you will find a list of some of the student leadership opportunities and the many ways available for students to get involved. It all begins with a willingness to volunteer.

After four years of involvement with SAA, I finally decided to do some research and find out more information about how and why AAA and SAA were established. Throughout this process, I was able to put together a brief timeline of the history of the two organizations and interview some of the many professional leaders responsible for promoting student leadership. 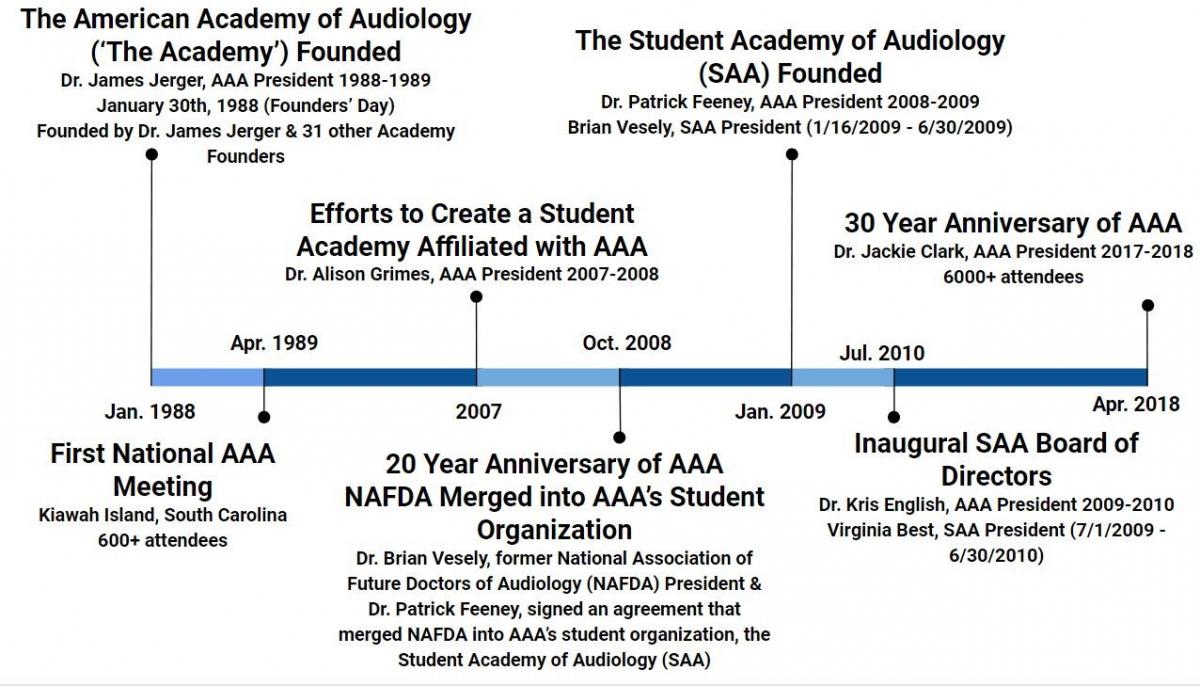 Q&A: What do Professional Leaders Have to Say?

Why was the Student Academy of Audiology (SAA) created?
NAFDA was loosely affiliated with AAA, ASHA, and ADA and there was a desire to establish SAA based off of NAFDA’s success. ASHA and AAA agreed that students needed to get involved and it made sense that AAA would have a student organization. The highpoint of my presidency was establishing SAA.

“The Academy recognizes that the future leadership comes from students. Not that this is a simple or easy undertaking — from student to Academy member, from making choices to volunteer and work for the profession to being recognized and nominated for a leadership role—the path to leadership takes time, energy, and a conscious choice to prepare oneself for a position of leadership. This is the path we current leaders choose—and some of today’s students will make these same choices.”

What impact did SAA have on AAA? On the profession?
The SAA has enriched AAA in many ways. Tangible impacts included growth in convention programs to meet students’ interests, and including SAA columns in Audiology Today. The need for an intro-level type of leadership training immediately became apparent, something AAA staff was very helpful with. I would like to think that the profession as a whole now feels more responsible for student education, but I can’t measure that.  The profession has already been committed to quality education, and with the arrival of the SAA, we had leaders of an organized group to talk to, listen to, work with. It filled a void! At the AAA convention in 2011, I sat with other Past Presidents, especially Dr. Allison Grimes, who said ‘We should have done this years ago.’  Everyone agreed.

What was SAA like during the first year it was implemented?
The first year was all about problem-solving: how was communication to be managed? What expenses were going to be covered? What expectations did the AAA board have of the SAA board, and vice-versa? Should students be seated on AAA committees – did they even want to be? Or did they want to focus on developing their own committees? SAA got a lot done that year.

Why was establishing SAA so important?
It was always important to have a student organization. An organization cannot plan on a sustainable future if it doesn’t nurture incoming members and their own professional growth. And the profession would be at risk of stagnation without student voices. One of the best days of the Academy’s history was that announcement [establishing SAA] at the 2009 General Assembly.

How were students involved in AAA prior to SAA?
To the best of my knowledge, students had very limited involvement. I myself was not involved in the Academy as a student, though I do recall that student volunteers were sought to assist with the national convention.  There were some student organizations from other professional groups though they did not have a large presence at my university and I was not aware of a significant amount of active outreach to students.

What is your perspective on SAA and how has it changed student involvement within the profession?
It has been very exciting to see future leaders develop through SAA. I am impressed with the organization. It became well structured and grew into quite a large organization in a very short amount of time. I think we can all learn a lot from SAA – the enthusiasm of student leaders is infectious, and SAA has been very effective at maintaining membership engagement. One of the biggest changes I see in the profession from SAA is that students graduate as young professionals with an expectation of engagement and confidence to hold leadership positions. In my generation, I believe that there was a misperception that leadership was reserved for luminaries and those approaching retirement. SAA has shaken the status quo and proven that all demographics are necessary for leadership and have something to contribute.

Dr. Jackie Clark
Clinical Associate Professor at the University of Texas at Dallas
AAA President, 2017-2018
AAA Board of Directors 2013-present

Why is student leadership important?
Student leaders have an opportunity of absorbing and learning about leadership and commitment during those very early stages of growth. It takes a bit of time to learn about what leadership style fits your personality and comfort level. Fortunately, there are other upper class leaders that you can learn from; either how NOT to handle a situation or how to make a positive impact. Through the process, you learn much more about yourself and the political history of the profession that you are representing.

In closing, I would like to thank each individual who contributed to this entry and shared their open and honest opinions. To the readers, I hope you have found this both interesting and insightful. Again, I encourage you all to reach out to your colleagues and other professionals, get involved, and volunteer your time at the local, state, national, and even international level. Audiology is OUR profession and we are the ones who will lead it in the right direction.

Welcome to the Student Academy of Audiology (SAA) Pathways to Audiology Interview Series! While many audiologists come from a Communication Science Disorders (CSD) background, others have taken different pathways to the field. In this series, the SAA will interview both audiologists and AuD students who have or are taking non-traditional routes into the profession of audiology….

Welcome to the SAA Becoming a ____ Audiologist Interview Series! There are many pathways or fields of audiology. In this series, the SAA will interview audiologists who work in varying fields of audiology. Our next interview is with Rachel Cornwell, AuD, MBA, a Chief of Audiology at Fort Jackson Army Health Clinic. Dr. Cornwell also does contract…